Whitewater Rafting - The Chattooga - Class III-V
We decided to try a new river this time since we were kinda bored with the moderate-level and very short Ocoee. The Chattooga seemed to be the next logical step. The Where the Ocoee was only three hours, this trip was seven. It also had more dangerous rapids, as it was almost all Class IV with a of Class V's. The distance was what made it so different from the Ocoee, because it became pretty tough to do the required paddling at the end due to exhaustion.
We again went with NOC (Nantahala Outdoor Center.) Our guide was really cool and really laid back, but he had a really freaky thing going on with his foot - two of his toes were fused into one!
Read More 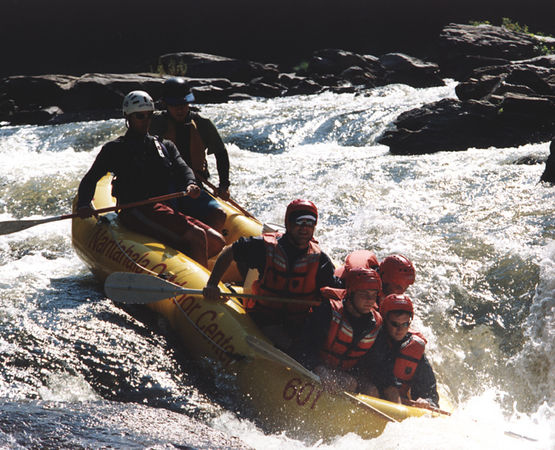 Squinchy - June, 1999
Chattooga River, Dillard, Georgia
That's me in the middle of the boat, driver's side. I think I'm bracing for the inevitable. We just got this picture because we thought it was hilarious that we were all squished up in the front of the boat (not on purpose.)