Bonnaroo - The mother of all music fests. Woodstock for the new millenium. Over 100,000 people camping out in a 700 acre field in Manchester, TN for three days in complete anarchy.

This was the first time I went (as well as Missy's only time), and I can promise you this... I had no idea. Lessons were defintely learned for the following years.

Let me give you an idea of how it started, for instance. First, the only vehicle we could take was my one year old Mustang convertible It was a four hour drive from Louisville and we left at 3am. We arrived at our interstate exit, a mere mile-and-a-half from the ticket gates, near the expected time (the overpass picture is timestamped at 6:34am, which includes our timezone change). However tired I was by working and packing all day. we caught our second wind because we made it and the fun was about to start. I pulled up to the back of the line of traffic on top of the offramp's overpass (photo) and cracked open my first beer of the weekend. Then my second. Then my third through sixth (after that I lost count). We arrived at our campsite around 1:00 p.m. You read that right: 6.5 hours to go the last 1.5 miles. Let me do a little math for you, putting my bachelor's in engineering degree to good use (or anybody that finished their first year of high school.) Using the good ol' "RTD" (Rate X Time = Distance) formula, we can determine that our average speed for 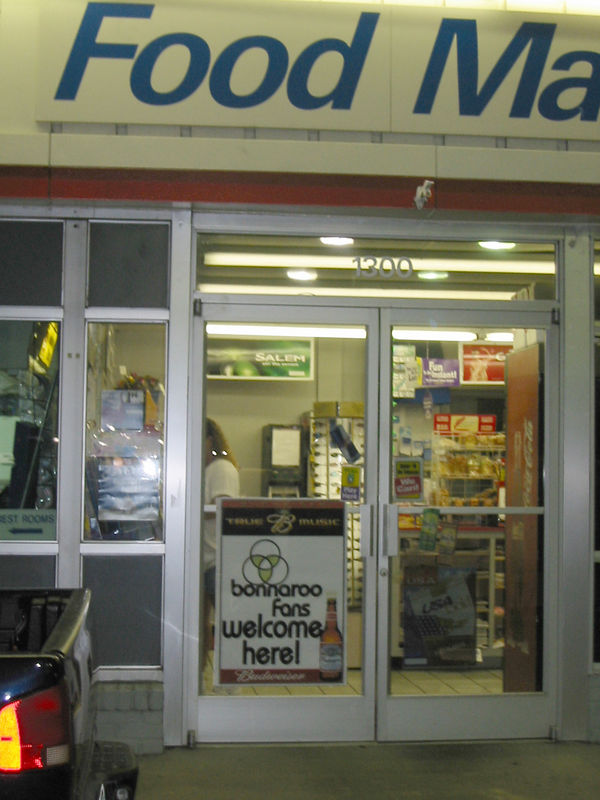